But when the directive came from Chris Ghaemmaghami (“Dr. G,” as Adams called him), then UVA Health’s interim CEO, in mid-March for all men to rid themselves of facial hair in order ensure a proper fit for protective N-95 face masks, Adams—manager of UVA’s Coronary Care Unit—knew he would.

And so, the following Saturday, Adams took a trimmer and a razor to the mustache he’d worn since age 14 for just the third time in his nearly 58 years. None of his work colleagues or his grown children had seen him without it. For Adams, though, it was a sacrifice he was happy to make.

“I consider it to be an act of solidarity,” quipped Adams, “with all the other men who are now able to sense the faintest breezes or temperature changes.” 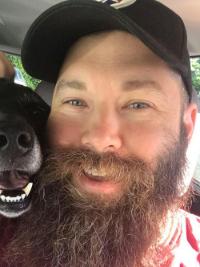 “The visceral feeling of what’s coming, and why I had to do it, was permeating everything. I’ve done a lot of stuff with this thing [the beard] on, and for it to be missing is really a reality check of where things stand.”

In the era of COVID-19 and the exhaustive changes it’s wrought—including facility shifts, healthcare protocols, and redeployment of staff—many frontline healthcare workers, several UVA School of Nursing alumni and students among them, are also adjusting to life without facial hair. At UVA Health, clinicians who come into contact with infectious diseases like COVID are personally fitted for protective masks which entirely cover the head and face.

Darrah was among the first clinicians to remove his beard and mustache even before the shaving mandate was announced. Darrah called the shearing (“old-school analog, with scissors”) a “symbol, in and of itself.”

“The visceral feeling of what’s coming, and why I had to do it, was permeating everything,” said Darrah, who works on 3 West with COVID patients. “I’ve done a lot of stuff with this thing [the beard] on, and for it to be missing is really a reality check of where things stand.”

For Darrah, who took two decades to cultivate the beard and just 25 minutes to remove it, it was a tearful, sobering moment in a fearful, uncertain time.

“It really sends a message that, when it comes to the most nitty-gritty stuff in the trenches, we’re serious,” said Darrah, who’s worked at UVA for ten years. “We need to do everything we can to provide care for patients who aren’t here yet by staying well. There’s no sense in waiting while we have the precious gift of time, and the writing is on the wall.”

While COVID patients’ symptoms mimic other critical diseases like cold or flu, Ryan Goldschmidt (MSN `22), a critical care nurse in the second semester of UVA’s nurse practitioner program who’s also been caring for COVID-19 patients, noted their high potential to quickly decompensate. Many of Goldschmidt’s COVID patients on the special pathogens unit are on ventilators, and lie in bed face down, he said, a position that aids in blood flow to the lungs and helps circulate oxygen throughout the body.

“With coronavirus, you have to do that early, and when we think the disease process is advanced, we initiate those actions earlier, rather than later,” he said.

For Goldschmidt, a critical care nurse since 2016, the work is as strange and new as the “baby face” he’s rediscovered underneath the beard he’d been growing since last summer. He’s thankful for wife Allie, who also works on UVA’s special pathogens unit, who helped cut back his beard in the couple’s bathroom a week ago, and the relief found in his off-hours: walking his dog, watching movies, “normal stuff” even in abnormal times.

“The stress comes from going into work and just the unknowns,” explained Goldschmidt. “You don’t really know if the unit is going to be crammed, and you don’t know what your day is going to be like when you go.”

If unknowns for these nurses loom large, so does their understanding that they need to stay well. In pre-pandemic times, Adams’ unit had been working on establishing better work-life balance, and Adams had occasionally found himself gently admonishing staffers who answered emails and texts in their off-time. Now, such constant communication is the rule, not the exception, and part of a series of accommodations that frontline caregivers everywhere are making.

“My staff have been very understanding, and are exceeding their roles by themselves,” said Adams, who added that former colleagues have been reaching out with offers of help, food, even sewing surgical tie-back caps for his staff to keep the remaining hair on their heads at bay.

“People are fragile now,” said Darrah. “They’re human, and to feel so uncertain about our personal safety and the shortcomings even in a system like ours that’s transparent, the reality of seeing your peers die around the world . . . it’s really hard.”

Together and separately, they’re look for the bright spots where they can, acknowledging uncertainty, and doing their best to care for others, and remain well. And when the pandemic passes, each of them has plans to grow a little something on their faces to celebrate having reached the other side of this crisis, a victory made possible by those on the frontlines.

“I’m really just waiting for the OK,” said Darrah, adding that his beard “will definitely come back, just grayer than before.”