Stevie Wonder, Marvin Gaye, Michael Jackson. And she hopes—as she cares for those suffering from COVID-19 at a V.A. hospital in lower Manhattan—that they find lift in it, too. 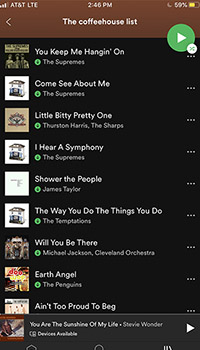 “Music is something with profound medical effects,” says Talbott, who earned a BSN from UVA in 2016, and has been in New York City since early April. “These patients can’t respond, they can’t talk, they can’t interact, so the way I imagine they’d feel most safe is through positive touch and sounds and music. We have no idea how much they’re hearing and understanding, but I hope the songs bring them joy.”

Until early this spring, Talbot was an ICU nurse at Children’s National Hospital, in Washington, D.C., where she loved the “acuity of critical care nursing, of being able to focus on just one patient,” and the “challenge of having to use [her] mind constantly, figuring out intense scenarios, and how to solve them.”

“I know you can’t see me, you can’t talk to me, or hear me, but you know what a human hand feels like, and I’m going to give you mine.”

Elise Bottimore Talbot (BSN `16) to the COVID patients she cares for in New York City.

So when COVID struck in New York City in late winter, Talbot—familiar with ventilators, tracheostomies, and the infinite complexities of critical care—knew she had the skills to help. She signed up with a nurse staffing agency in March, and arrived in Manhattan just as the worst of the pandemic began to unfold.

“It feels like I’ve been spending the past four years of my life preparing for this time,” says Talbot, who’s living in the Union Square Marriott Hotel with her husband, Joshua Talbot, and engineering consultant and fellow UVA graduate. “It’s an honor to help.”

Though Talbot arrived at the city’s numeric height of COVID patients, she also came at a point when clinicians “had a better idea of what to do and what not to do with COVID patients,” even though many unknowns remain, and “it still is, sometimes, trial and error as we go.” Each day, she walks or bikes to the New York Harbor V.A. Hospital—which, for the first time in history, has opened to non-military patients due to the demand for ICU beds—where all patients suffer from COVID-19. Some need dialysis, require intubation to breathe, and many have had tracheostomies.

Though her patients are sedated, Talbot sings as she works. Her phone’s playlists, geared to her patients’ age profiles, include everything from gospel to Motown to classic rock from the 1960s and 70s. With The Supremes’ “You Keep Me Hangin’ On” and Stevie Wonder’s “You Are the Sunshine of My Life” humming in the background, Talbot holds patients’ hands, talks to them quietly, and cradles their heads and feet.

“I know you can’t see me, you can’t talk to me, or hear me,” Talbot explains to them, “but you know what a human hand feels like, and I’m going to give you mine.”

In the eight weeks since her arrival, the patient load at New York Harbor V.A. has decreased by half, mostly due to mortalities. But finally, finally, the city’s coronavirus curve is flattening, even as residents’ nightly 7 p.m. salute to care workers on the COVID-19 frontlines continues strong, and Talbot’s songs rock on.

Last month, in fact, Talbot cared for her very first non-sedated patient who, when she entered the room, was playing Frank Sinatra, Louis Armstrong, and Ella Fitzgerald on his phone. They sang together as she gave him his breakfast.

Talbot and her husband will remain in New York City through July.